Getting The Most Out Of Your Marines: Restoration Project and 'Eavy Metal 80s Special 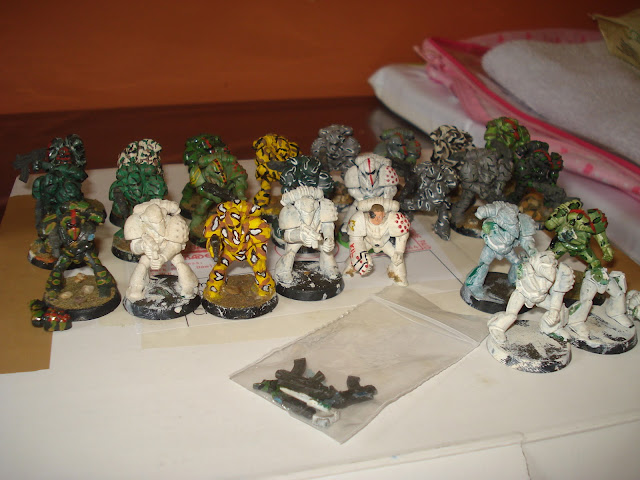 There has been much recent talk about whether or not you can still get a good deal on eBay. Well, how about this little Buy it Now I picked up this week. I got 25 Rogue Trader era plastic marines for £20, so that is less than a pound per model! Trouble is, these miniatures are some of the most brutalised I have ever seen when it comes to poor painting. Detail swamped by the undercoat, gloss (presumably enamels) paint here and there, and a wide range of suitably retro camo colour schemes. In times past, I'd have run a mile from these but with the wonderous qualities of dettol, I feel that these early GW plastics could be restored to a very high standard of retro style painting. 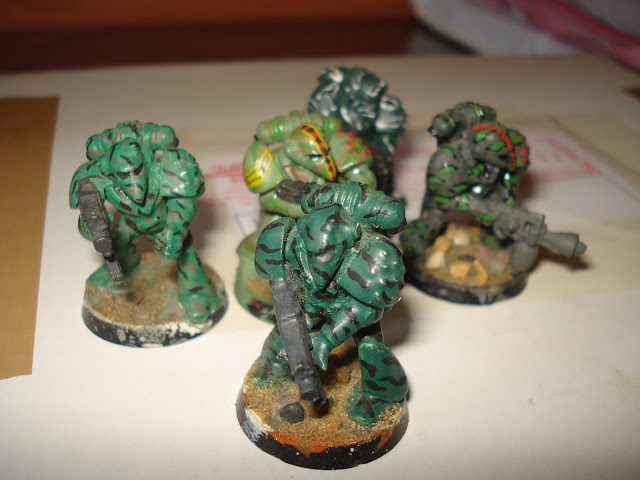 Jumbling around with the models I was able to big several 5 man squads. This, the first squad, has four marines with bolters and a marine with a flamer. Wonderful retro design! 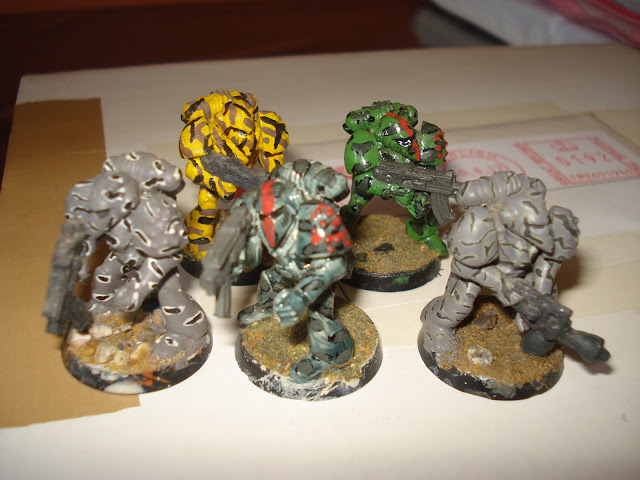 The second squad is exactly the same. Four marines with bolters and a marine with a flamer. Lovely! 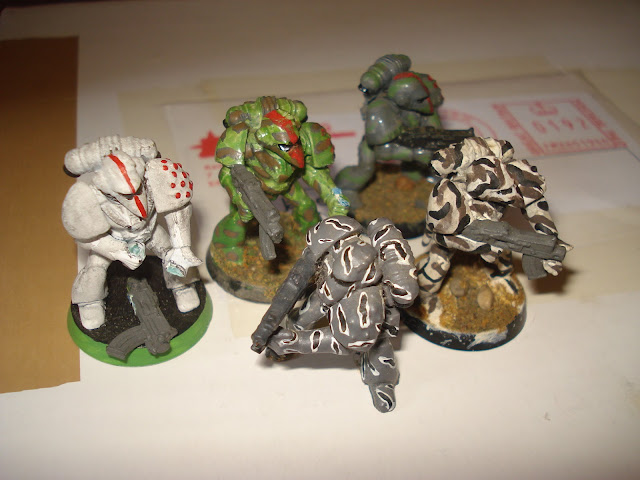 The third squad was a little more based about, with a base missing and a detached weapon. Nothing major to repair here though. All the marines in this squad are armed with bolters. 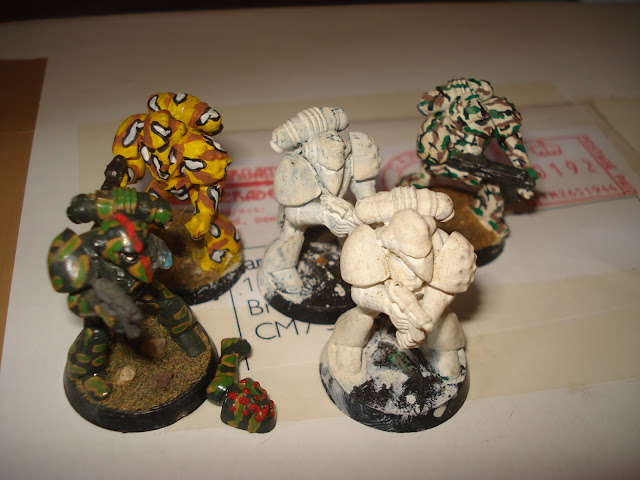 The final squad has only one marine armed with a bolter, the rest are armed with a smaller pistol, which I assume are an early form of a bolt pistol. Anyone put me right on this? 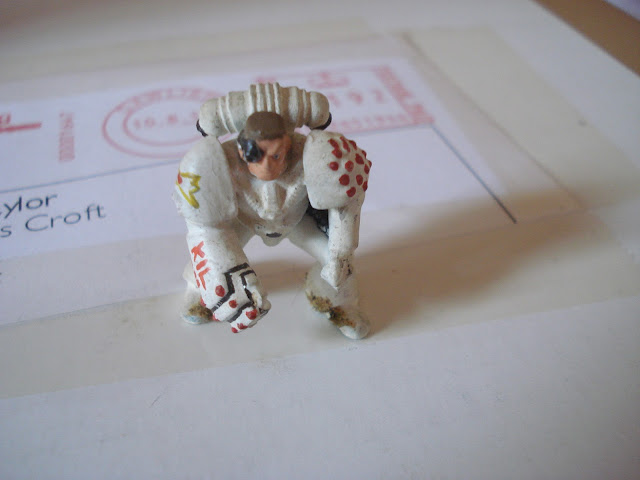 I have one powerfist commander too. All this example needs is a base. You can see just how bad the undercoat of white is here. Really thickly applied. It has the aged whiff of humbrol white. 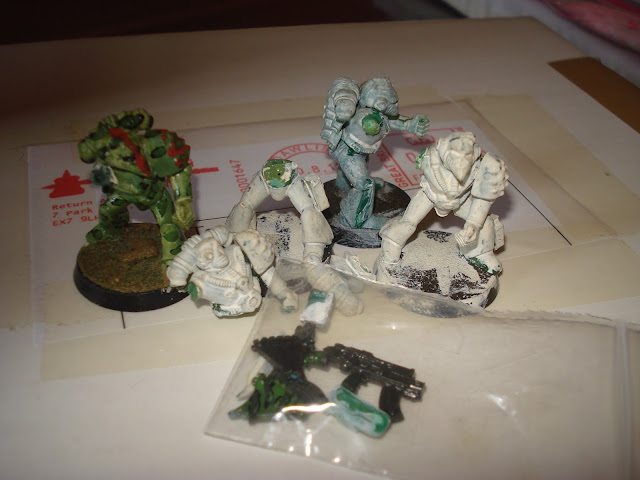 The job lot also had a small pile of broken marines. They are all missing their right arms sadly, though I have some spare weapons and chainblades. There are also the remains of a second marine commander here.

My plan here is to try and strip these models down to the original plastic before trying to separate the individual components. Once I have these broken down, I'll soak them in dettol once more and them try and rebuild them with more dramatic, old school poses. Then, of course, I could paint them!

As you are aware, I have been using issue 94 of White Dwarf for inspiration for posts. The last few posts have had scans from this essential retro issue. One of the reasons the issue is so vital is that it contains a really nice 'Eavy Metal article entitled 'Making the most out of your Marines'. This article contains old school insights from such luminaries as Rick Priestley, John Blanche, Aly Morrison, the enigmatic Sid (where is he now?) and Nick Bibby. Quite a pedigree then. It really is worth a read, if not just for the the crazy '80s conversions using other plastic kits of the time, including a bizarre dalek space marine mix! 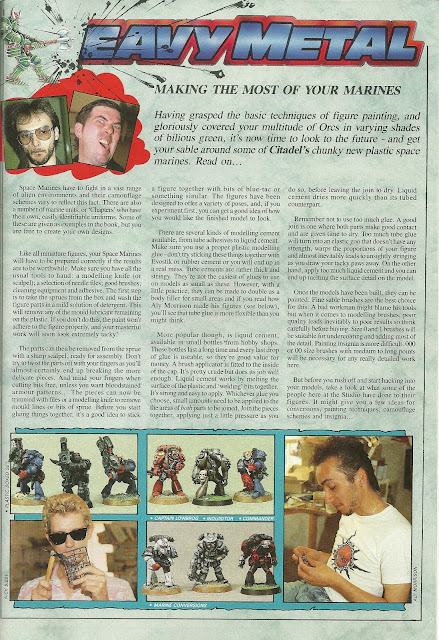 This may surprise recent converts to retro gaming, but 'Eavy Metal used to actually have words in it. Lots of them too. And those words treated the reader as an adult to boot! Don't worry though, there are still loads of pictures of space marines, happily in different styles and not just a bland house look. There is even a whiff of, dare I say it, comedy about the proceedings. I love the image above of Bibby in the '80s shades.

Just follow this link to see what I am on about. I have included the entire article below.