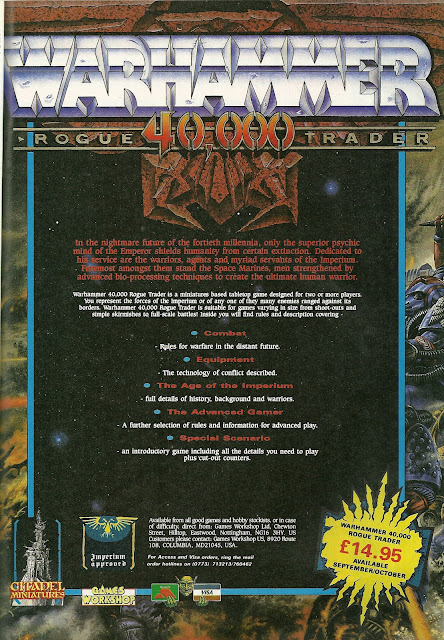 Advert for Rogue Trader taken from White Dwarf 94. Note: before Chapter Approved reared its sci-fi styled head, the powers that were toyed with 'Imperium Approved'.

Welcome back to Dark Technologies, the history of Rogue Trader told through the products, articles and miniatures released by GW in the late 80s. Things are certainly moving on... We remain with WD94 and will be discussing the second scenario published for Rogue Trader (the first being the rather lamely titled, the Battle at the Farm, in the Rogue Trader rulebook) called 'A Skirmish on Rynn's World', authored by the mega-talented Rick 'I am largely responsible for modern wargaming' Priestley.

This is a title that should be familiar with modern 40k audiences. Rynn's World has an iconic place in 40k history, with novels and fluff aplenty published about it. Subsequently, we needn't discuss the background to the scenario too much. A brief overview will be sufficient, I think! 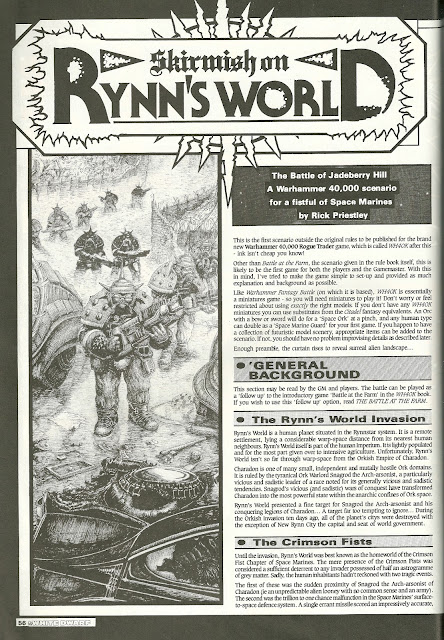 The battle that this scenario describes is that of Jadeberry Hill. Not very GiRm DaRk is it? Jadeberry Hill sounds a bit like a place out of a girly children's programme and not a violent, futuristic table-top wargame. Still, it fits in with the Battle at the Farm for being suitably '80s naff. The article continues to explain that Rynn's World is part of the 'Rynnstar' system located near to the Orkish Empire of Charadon. This area of space is ruled by one Arch Arsonist by the name of Snagrod. This vicious and sadistic leader has plotted to invade the planet, despite the presence of the Crimson Fist Chapter of the Space Marines, and launched his invasion ten days previously. Incredibly, a one in a billion chance saw the shields protecting the Space Marine's base malfunction just as an enormous rocket crashed into it; wiping out most of the Chapter. Only the group at the Farm and one seconded to the Defence Force of New Rynn City guard are left alive... Suitably stirring stuff...

The rest of the article contains the GM's notes. Remember, at this time Rogue Trader was intended to be a skirmish game with a heavy roleplay element. The thought that people would go on to play massive pitched battles had not yet fully developed. The idea was that you would only need a few models to play Rogue Trader, after all, at this time Warhammer was king of the castle and Citadel were shifting over a million metal models for that particular game a month.

I won't elaborate on the GM's notes, I'll leave you to read them yourselves (just in case you're planning on running this scenario with some friends and don't want to be 'in the know' so to speak) but I can say that they cover a few interesting tactical problems for both the Orks and the Space Marine player. Just reading them gets me all excited for the tactical side of games like this instead of just 'Cleanse and Burn' tediousness. One thing that is interesting are the notes on the set up of the playing area. The name of the famous 'Pakomac' River is misspelt as 'Pakamac' on several occasions in the text and it makes you wonder with hindsight if this was the river's original name. If so, I can see why it was changed; 'Pakamac' sounds like a raincoat you'd screw up in a sack and take to a music festival, doesn't it? Again, not very GrIm DaRk is it?

Next up, we are given an interesting summary of the all the weapons and equipment used in the game, including some more typos (was this article produced in a rush?) and an intriguing mistake where the word '***piccy' appears where it should say 'Chainsword'. This is really quite useful to photocopy if you fancied a quick game as it has all the details needed to play any game of what I like to call 'Early Rogue Trader'.

Two further pages remain in the article and these go on to describe the forces used in the engagement. Looking at the detail, I have most of the models required to play this scenario, though some missile launchers are still required for the Space Marines and some Heavy Bolters for the Orks, nothing eBay couldn't remedy though.

Overall, a nice little article and I have included a link to a pdf copy of the scenario at the bottom of this post if you are interested in a little further reading. 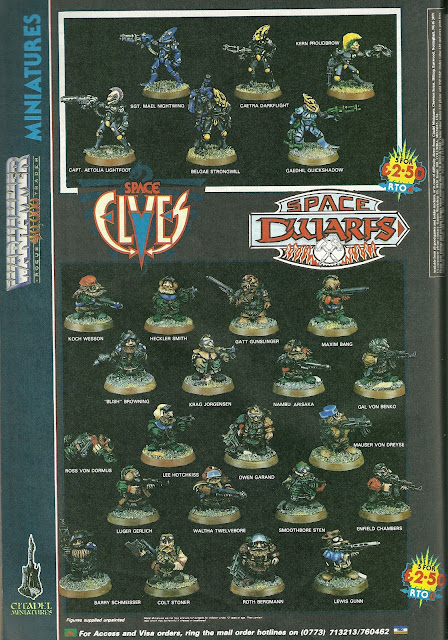 Moving on, and there is a nice little colour page detailing some Rogue Trader releases for that month. Here we see for the first time some of the Space Elves (not yet Eldar) and the Space Dwarfs (not yet Squats). Both sets, I am sure that you agree, are instant classics. The Eldar at this point have that lovely '80s punky feel and sculpted by the genius of Jes Goodwin are absolute musts for any serious collector. The paint schemes too are suitably wild and alien and I just love the names that they are given... Kern Proudbrow anyone?

The Space Dwarf release is more substantial. Twenty models to the Eldar's (or should we call them Space Elves?) six. I love their design (I too never found GW's 'excuse' for dropping them in any way satisfactory) in a wonderfully '80s biker way (which many of the GW staff were at the time I am lead to believe...). The colour scheme is also fantastic; the green and red and blue working perfectly to create a gritty, almost Vietnam vet looking force of troops that even though are set in a sci fi universe are entirely believable. The names too are amusing, all puns or half-puns on famous guns. I am sure that you will agree that this set is an absolute must for any fan of Citadel miniatures.

Bet Erny has got the lot in that fabled lock up of his too...

Anyway, here is the link to Skirmish on Rynn's World.