Really old people or retro consumers will be aware of White Dwarf's 'Open Box'. This was a section of the magazine used in the 1980s to review gaming supplements and general what-nots. on its hallowed pages you could read reviews of anything and everything from AD&D adventures to Ghostbusters the RPG written by such visionaries as Jim Bambra, Marc Gascoigne, Stephen Hand and Paul Cockburn. As the focus shifted away from Games Workshop (a trading company that sold fantasy games) to Citadel Miniatures (a miniature manufacturer selling lead and rule sets for lead) the decision was made to jettison the non company products and focus on GW's own stable of releases.

Hence no need for Open Box any further. A new series what introduced, entitled Marginalia, which set out to give a soapbox to designs to talk about the decisions they had made during the design process of a particular product. The first to step up to the mark was none other than Rick Priestley, author of Rogue Trader. His account is fascinating and is full of interesting points. I have reproduced it here in full. 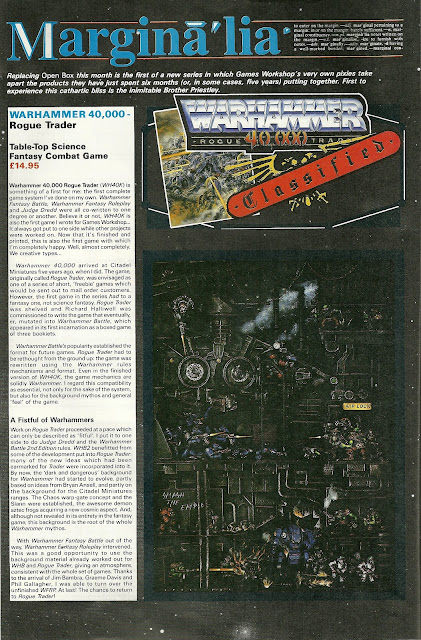 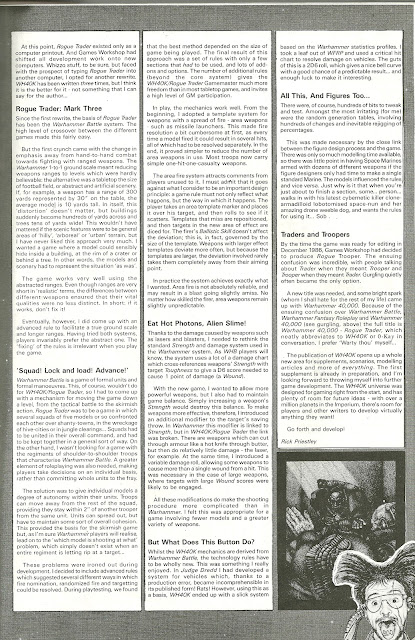 According to Rick, Warhammer 40,000 Rogue Trader was something of a first for the erstwhile games designer, for it was the first project he worked on on his own. He'd previously contributed to Warhammer Fantasy Battle, Warhammer Fantasy Roleplay and Judge Dredd. Strangely, Rogue Trader had been written before any of the previously mentioned games were designed but it was always put to one side as other more pressing projects pushing their unsightly heads to the fore.

It was originally intended to be one of the 'freebie' games that would be given away with purchases by mail order customers, one of the other 'freebies' being what would eventually become Fantasy Battle. The popularity of this particular game (work being done on its third edition concurrently with the time Rogue Trader was being re-designed) established the format for future games. Rogue Trader was 'rethought' from the ground up using many of the mechanisms worked out from Warhammer Fantay Battle. At the time, Rick thought this relationship was essential 'not only for the sake of the system, but also for the background mythos and general "feel" of the game.'

Rick describes the development cycle of the game as 'fitful'. He states that many ideas that were developed for Rogue Trader found their way into Warhammer 2nd edition. 'By now the "dark and dangerous" background for Warhammer had started to evolve, partly based on ideas by Bryan Ansell, and partly on the background of the Citadel miniatures ranges.' This point is interesting, as even at this early stage, GW were making design decisions based on the models that they were designing and selling. These judgments were a little more restrained than they are now, thankfully! By now, Rogue Trader existed as a rather tatty print-out (imagine the reams of that old concertina computer paper, the stuff with the removable holes) and rather than re-type up the manuscript, Rick chose to begin again afresh now that the unfinished WFRP had been handed over to Jim Bambra, Graeme Davis and Phil Gallagher.

Since a previous re-write, the basis of Rogue Trader had been based firmly on WHFB. There were a couple of problems as Rick explained, 'But the first crunch came with the change in emphasis away from hand-to-hand combat towards fighting with ranged weapons.' Problems persisted in creating a believable ground scale for weapon ranges. Priestley opted to work with abstract ranges and went on to state that 'even though ranges are very short in realistic terms, the differences between different weapons ensured that their vital qualities are less distinct.'

Another issue Rick had to deal with was the damaged caused by powerful weapons. He needed to rethink that standard strength and damage system used in Warhammer. 'With the new game (Rogue Trader) I wanted to allow more powerful weapons, but also had to maintain game balance.Simply increasing a weapon's strength would destroy this balance. To make weapons more effective, therefore, I introduced an additional modifier to the target's saving throw. In Warhammer this modifier is linked to strength but in Rogue Trader the link was broken. There are weapons that can cut through armour like a hot knife through butter, but then do relatively little damage - the laser for example. At the same time, I introduced a variable damage roll, allowing some weapons to do more damage than a wound with a single hit. This was necessary in the case of large weapons, where targets with large wound scored were likely to be engaged. All these modifications do make the shooting procedure more complicated than in Warhammer. I felt this was appropriate for a game involving fewer models and a greater variety of weapons.'

Again, Rick discusses that close link between rule development and model design, 'there was only so much modelling time available, so there was no point in having space marines armed with loads of tiny weapons if the figure designers only had time to create a single marine model. The models were influenced by the rules and vice versa. Just why is it that when you're just about to finish a section, some... person... walks in in which his latest cybernetic killer clone-armadilliod lobotomised space-nun and her amazing drone weeble dog, and wants the rules of using it... Sob.' However, there is no mention here of the Sales and Marketing boys who have just completed the number crunching and discovered that the forementioned space-nuns are are selling like hot cakes and need extra umphh adding to their stat line as well as an aggressive marketing campaign in White Dwarf liberally peppered with the adjectives 'cool' and 'awesome'. What we have here is a design relationship between the model makers and the rule writers that seems entirely positive and creative. If that really was the case cannot be known from this article, but it certainly seems far more healthy than the current regime's attitude.

Still, there were even more teething problems for Rick to resolve before the game could be published. 'By the time the game was ready for editing in December 1986, Games Workshop had decided to produce Rogue Trooper.' This game was based on the popular 2000AD strip of the same name and Citadel had produced and small range of miniatures to support it. 'The ensuing confusion was incredible, with people talking about Trader when they meant Trooper and Trooper when they meant Trader. Gurgling quietly often became the only option.' After discussion in the studio a new title was coined by 'some bright spark' that Rick confesses he would 'hate for the rest of his life' came up with Warhammer 40,000 Rogue Trader, though Rick preferred 'Warty Thou'...

'The publication of Rogue Trader,' Rick summed up, 'opens up a whole new area of supplements, scenarios, modelling, articles and more of everything. The first supplement is already in preparation, and I am looking forwards to throwing myself into further game development. The Rogue Trader universe was designed for gaming right from the start, and has plenty of room for future ideas - with over a million planets in the Imperium, there's room for players and other writers to develop virtually anything they want!

Go forth and develop!'

Little did they know what a juggernaut of gaming Rick had unleashed onto the world and develop it they did... Changing a small scale skirmish game into the most successful table top game in history.
Posted by Orlygg at 04:16