Hello and welcome back to Dark Technologies, the history of Rogue Trader through its releases, publications and rules. Today we need to discuss the Rogue Trader material from White Dwarf 95. As many of you will know, this particular issue was a Warhammer heavy... Not only was there a flexi disk of Warhammer inspired music but there was also loads of Warhammer Third Edition release material on offer. Subsequently, Rogue Trader was a little squashed up in this issue and rather limited. 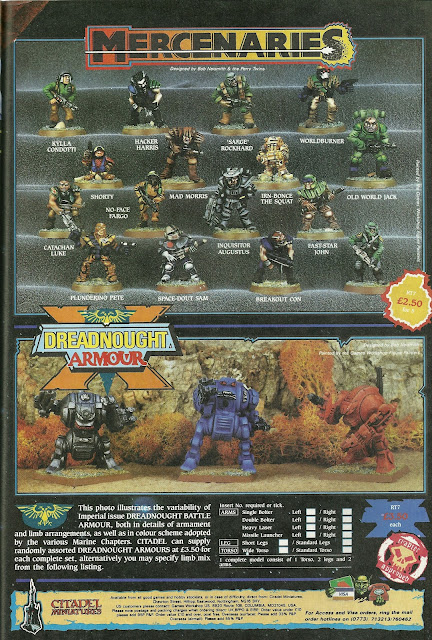 Bob Naismith and the Perry twins produced a wonderful range of space mercenaries here. There are obvious prototypes to what would later become 40k standards. We have squats, ratlings, power armoured troops and Imperial Guardesque soldiers. All the sculpts in this set, as I am sure that you will agree, are extremely well executed and quite varied. These models must have been a real pleasure to paint back in the day (as I am sure they will be today, if you can get your hands on them...) and one theme that I am keen to explore myself when painting up Rogue Trader minis is the bizarre 'future camo' scheme evident on several of these models. I particularly like the colour scheme on Mad Morris with the jet black comet tail effect.

Additionally, if you look to the top right hand side of the models you will see a character by the name of World Burner. Some time ago, in the Art of Rogue Trader, I wondered at who this chap was... and here he is for all of the world to see... Still, it doesn't give us much to go on does it?

Over all, a fantastic early release with some really nice sculpts.

Upon first glance, they look a little disappointing, don't they? That is certainly how I felt when I first saw these models a back in the mid 2000s. Compared to the massive modern plastic versions the design boys at Citadel have certainly moved on a long way from these early concepts. However, in more recent years these models have really begun to grow on me and I find them rather endearing now. They positively reek of 1980s design ethic though don't they? What is interesting is the number of weapon options that these first releases were intended to have, and its clear that even at this early stage it was possible to create the armour you wanted.

The colour schemes for the red and blue dreadnoughts lack depth, especially when compared with their armaments, so I would not be taking any inspiration from there. The first model is must better and I really like the way the Citadel painter has managed to achieve that oily metal look, very apt for a giant, robotic killer really! And the faces? They are just begging to be painted, aren't they?

Those of you that frequented the 1980s will no doubt recall the classic television series, The A-Team. Many of you probably watched it on early Saturday evenings as I did. BA was always my favourite character, not because of his tendency to 'pity the fool' or throw bag guys throw windows but his skill at building incredible vehicles and weapons from the tools left lying around in garages and lock ups. Rick Priestley shares many of these skills, but instead of fighting crime he produces wargames terrain from the junk that is left lying around.

In this famous article, he goes on to explain (with the help of a few other GW illumni) how to produce vehicles from (yes, that's correct) a deodorant stick and other bits and bobs. Classic '80s madness! 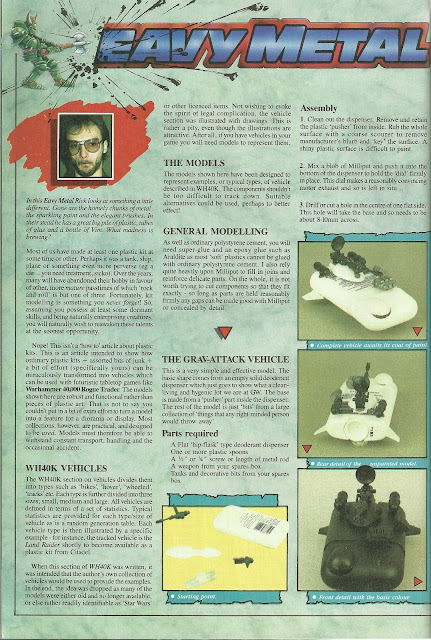 Here is the article in full... Rogue-Trader-Eavy-Metal

They stripped down well didn't they? A few days in the dettol solution was enough to strip off the layers of paint that had engulfed these marines for too many years. Peeling the stuff off left a mess that must resemble a bulimic pick 'n' mix sweet fanatic's vomit after a particularly heavy stuffing session... These boys must have been painted, then repainted and then painted again. The white enamel was rather tricky to remove as the dettol left a white powder residue over the marines. I had to use a sharpened match stick to shift this. I didn't quite get it all off but I feel I did enough to result in a good finish.

Using superglue, I messed around with the pieces until I produced a finished piece that I was happy with. A nice secure bond ensures that there will be no accidents during gaming. What do readers think of the pose? Once I was sure the marine was nice and dry I added a layer of sand to the base.


With the marine cleaned, built and undercoated I was ready to think about his adversary. I selected a random ork trooper from the Space Orks set with the intention of painting them both to a good standard at the same time. This way, I'd gradually build up two forces; marine and orks.

Off to the paint pots then...