I have recently been exploring the comic art that WD magazine used to run in the '80s. I have included a longer article over on my Warhammer blog realmofchaos80s but chose to post the Rogue Trader ones here.

Its seems the most appropriate place!

First up with have a Thrud the Barbarian strip set somewhere in the 40k universe. The art style is very similar to some of the images I posted previous; making Carl Critchlow (the creator of Thrud) the artist behind some of those images- can you work out which ones? 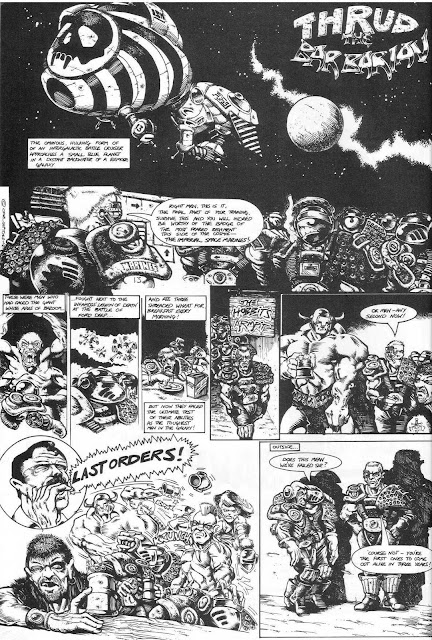 Here, Gobbledigook becomes involved in a contact between Rogue Trader marines and some Space Orks. Lots of zany fun to be had here. Enjoy!

The Art of Rogue Trader

The iconic frontispiece of Rogue Trader by John Sibbick. The heroic last stand of the Crimson Fists Chapter against orks. Its never been bettered, not even by Blanche himself.

I sit here with my battered paperback copy of Rogue Trader in front of me. I never owned it back in the day. We were straight fantasy boys but I had a fair few of the miniatures for painting and use with Space Hulk and Advanced Space Crusade round other people's houses.

As I flick through the pages the first thing that strikes me is the art. It incredibly varied in style but unlike Warhammer Fantasy Battle, which to varying degrees, love it or loathe it, is a gallery of GW's art assets circa
1987, Rogue Trader's art is a little more consistent, in a fairly inconsistent way. What do I mean by this? Well, the art was fairy contemporary to the ruleset. Many an artist was busy scribbling away through the middle 80s to contribute to the look of Rogue Trader, most of whom were regulars from the WFB side of GW's output, but there were a few new names in there too.

I really like the 2000AD influence in this picture. '80s comics, being a child of that decade, are always a favourite of mine. This image reminds me of Death's Head. Prototype bolter design there too.

Early Rogue Trader fluff about the marines. Not much to go on yet

I love the punky graffiti on the shoulder pad of this Crimson Fist. Very '80s street!

Iconography for Space Marines was clearly an important element from the beginning. Its change quite considerably since then, hasn't it?

Out of all the images here, this one has really got me thinking. Who are these guys? Prototype chaos marines or something different? What do you think?

What strange alien species is this? Or is that some kind of elaborate mask or helm?

I really like the 'shark face' design used on these early Blood Angels. I must have a go at painting one up one day!

Here are the early colour schemes for the Marines. Most of them are well known today. The Rainbow Warriors? Could they be one of the missing legions? (joke)

Again the varied style of the artwork is obvious; another comic strip style image. I like the Mad Max influences on this picture.

A fantastic picture. Is this a Space Marine? The jump pack is very familiar but the armour? Quite a nice image to do a conversion based on really, isn't it?

More grisly trophies. Not quite so heroic be these early Space Marines.

Sinister Marines pose with their weapons. These creatures look radically different from the Rogue Trader Marines (more on this later) and I wonder which came first? The art or the miniatures.

The fluid style gives this picture an immediacy. I bet it was drawn in a few minutes too.

No Chapter Masters yet, just Imperial Commanders. Here a trooper reports to his superior.

That's a lot of beaky marines. I wonder what they are doing here?

Is he riding some strange machine or are those wheels part of his body?

Look at this marine! Souped up with fancy chainsaw arm and tank track foot. Nasty!

An early concept of a titan?

I wonder what these marines will do with their slaves considering their squats? Write them out of the background perhaps?

Close combat carnage. Note how the art is beginning to reflect the models we know and love!

Looks like the work of Paul Bonner? Am I right? Either way, these marines look just like the RT plastic ones released in 1987. 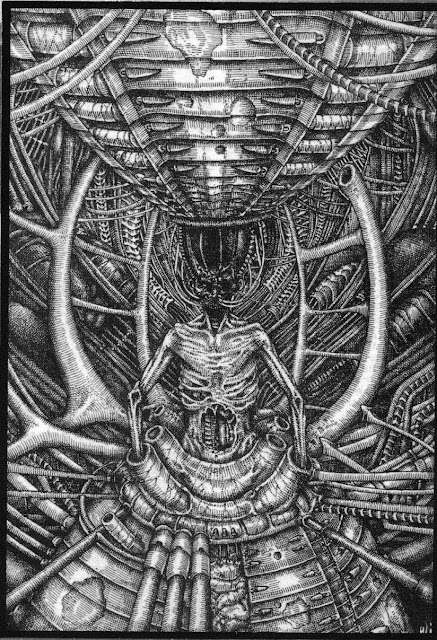 Finally, the Emperor himself.

Well the blog is only several hours old and I have already received my first contribution from the skilled hands of Ghola Scale. Some Rogue Trader goodness to start us off, with some metal marines from the late '80s painted up in the colours of the Ultra-marines. A simple scheme of blue and bolt gun works well against the sandy ochres of the bases. 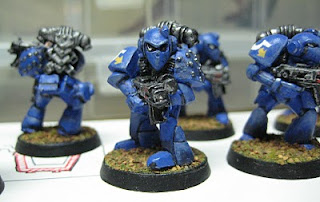 The last thing a mutant would see in the harsh universe of the 41st Millennium. 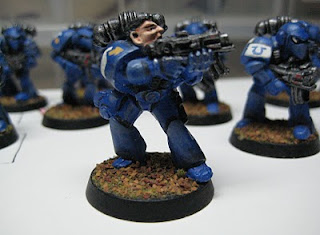 I love this sculpt and have been looking out for it on eBay for a while. Its the beaky helmet hanging from the belt that interests me - a lovely little detail. 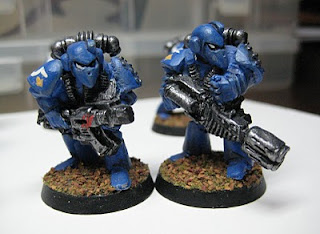 Two heavy weapons old school style. That is a very big gun you have their Mr Marine!

As is appropriate for old school Rogue Trader is the need to customize and establish that this is a degradied universe. Not every marine is going to be armed with a bolter. Ghola Scale has messed around with some sculpting (these are quite old, harking back to the early '90s) to arm a few troopers with AK-47s and converted bolters. 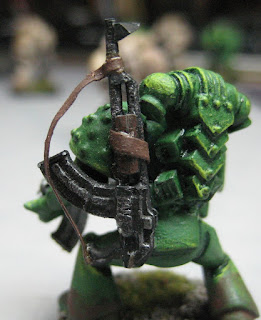 Looks like the old drybrush job here. They were the days; base coat, drybrush, base and then game! At least that AK is unlikely to jam even in the harsh and hostile alien environments these marines have to fight in! 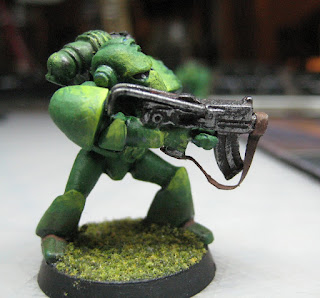 Stock added here along with the leather strap. Ghola made these from strips of paper- looks pretty effective, eh? I will have to have a go at this myself.

Messing around with kits, or 'kit-bashing' to the uninitiated, is great fun. Your imagination can really run riot. Here we have one of the classic plastic skeleton horde miniatures customed up with some odds and ends. This model makes me think of plenty of scenario ideas. No army lists in sight either. 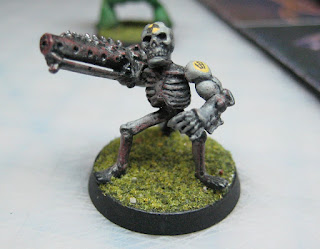 Perhaps this is the Emperor during a weekend break from the Golden Throne?

Over the years, our friend Ghola became much more proficient with the old sculpting. He moved on from rifles to rare and exotic alien creatures, namely an AMBULL! Now readers of my Warhammer Blog will know that the Ambull is one of my wants, how can I persuade Ghola to send one of these in the post? Any ideas? What a fantastic job and, in my view, this is better than the original. 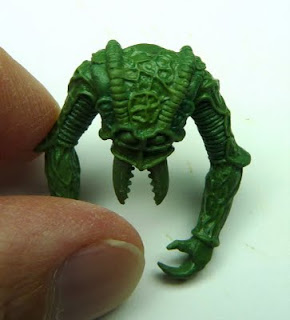 I wonder how long it took toe sculpt this? I am hopeless with the green stuff and would love to have the skill to produce something like this! I wouldn't need to use eBay so much for starters! 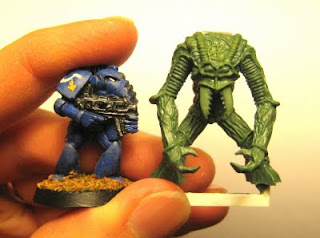 Here is a scale shot against one of the metal marines. Fantastic work there. I want one!

Well these images are just the tip of the iceburg for what Ghola has posted on his blog. If you are interested in seeing more (and I really recommend that you do) follow the link below.

"For more than a hundred centuries..."

"For more than a hundred centuries the Emperor has sat immobile on the Golden Throne of Earth. He is the Master of Mankind by the will of the gods and the master of a million worlds by the will of his inexhaustible armies. He is a rotting carcass writhing invisibly with power from the Dark Age of Technology. He is Carrion Lord of the Imperium to whom a thousand souls are sacrificed each day, and for whom blood is drunk and flesh is eaten. Human blood and human flesh- the stuff which the Imperium is made.


To be a man in such times is to be one amongst untold billions. It is to live the cruellest and most bloody regime imaginable. This is the tale of these times. It is a universe that you can live today if you dare- for this is a dark and terrible era where you will find little comfort of hope. If you want to take part in the adventure then prepare yourself now. Forget the power of technology, science and common humanity. Forget the promise of progress and understanding, for there is no peace amongst the stars, only an eternity of carnage and slaughter and the laughter of thirsting gods.


But the universe is a big place and, whatever happens, you will not be missed...."


And so it began!


The game had been in production since the early 80s and had been through many guises before it finally saw the cold light of print. This blog, the sister site to my Warhammer 3rd Edition blog, hopes to document the history of this iconic game and provide a chronological exploration of the game's releases, rules and background. And, of course, plenty of painted miniatures from my (admittedly small at the moment) collection of Rogue Trader miniatures from 1987-1992 and the collections of others.