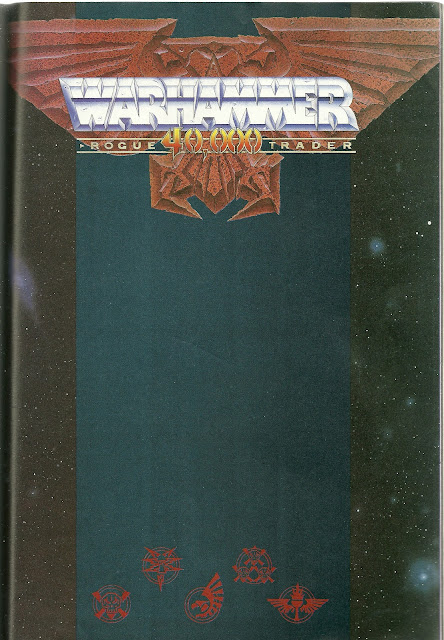 The first page published in WD concerning Rogue Trader. Nice graphics don't you think? Its all there from the very beginning; the aquilla, the chapter badges (though they are far more intricate here) and the star speckled background of a wild and varied universe.

Welcome to the first post chronicling the development of Rogue Trader. Today, we will explore in detail the launch article published in WD 93. The first thing that strikes a reader when flicking through these pages is the artwork. Unlike previous publications (WFRP and WFB) the artwork in Rogue Trader couldn't just be a splurge of the nicer pieces of fantasy art that GW had produced over the previous decade, it had to be something new and, for the first time, coherent. Another thing that strikes a cord when reading through this little manifest is that GW intended for their three games (WFRP, WFB and RT) to share a certain philosophy  and a mythos, something they are keen to stress is not the case today. 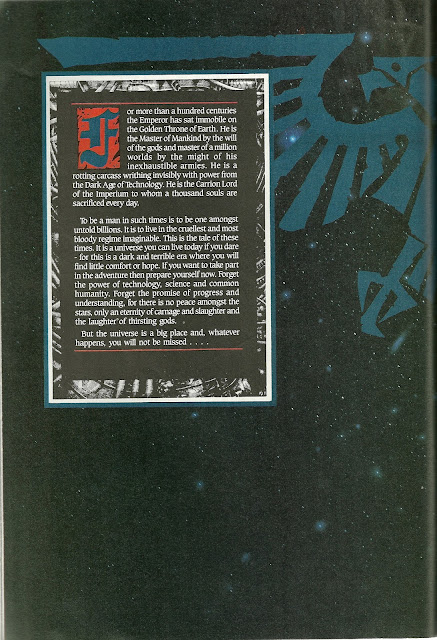 "For more than a hundred centuries the Emperor has sat immobile on the Golden Throne of Earth. He is the Master of Mankind by the will of the gods and the master of a million worlds by the will of his inexhaustible armies. He is a rotting carcass writhing invisibly with power from the Dark Age of Technology. He is Carrion Lord of the Imperium to whom a thousand souls are sacrificed each day, and for whom blood is drunk and flesh is eaten. Human blood and human flesh- the stuff which the Imperium is made.


To be a man in such times is to be one amongst untold billions. It is to live the cruellest and most bloody regime imaginable. This is the tale of these times. It is a universe that you can live today if you dare- for this is a dark and terrible era where you will find little comfort of hope. If you want to take part in the adventure then prepare yourself now. Forget the power of technology, science and common humanity. Forget the promise of progress and understanding, for there is no peace amongst the stars, only an eternity of carnage and slaughter and the laughter of thirsting gods.


But the universe is a big place and, whatever happens, you will not be missed...."


A so it began... The famous description of what Warhammer 40,000 really is. A dystopian wargame with medieval fantasy elements. This passage has be re-worked since, several times, but the crux of the piece 'There is no peace, no forgiveness; only war' is plain for all to see. 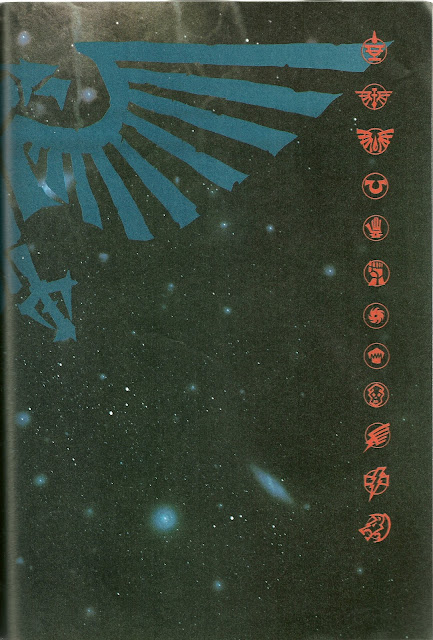 I find this page rather interesting. What we have are the prototype chapter badges of many of the marine forces we know today.They are certainly more intricate than they would later become and several of them have disappeared from the canon (Rainbow Warriors anyone?). 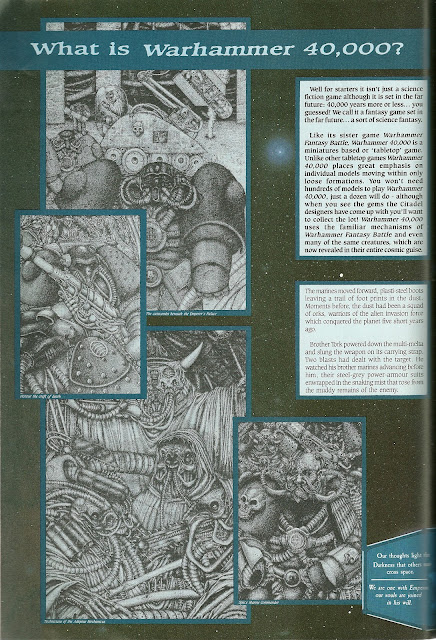 The first thing that strikes me when looking back over these documents with fresh eyes is the artwork. Its certainly very different to the black and white fantasy line work that GW had been commissioning for the previous ten years. Its black, scratchy and contains many meldings of flesh and machine. Its sinister too! No heroic Space Marines yet, just dangerously psychotic cyber warriors that seem more closely linked to a chapter of the Hell's Angels rather than the Angels of Death. Its clear that at the time of conception, the artists had a pretty free reign to draw what they wanted. Sure, they had the plastic kits and a few metal models but the 'look' of power armour had let to be defined so its far more wild and varied.

It is also pleasing to see the 40k 'thoughts for the day' evident at this early stage. These little snippits of wisdom were always of great interest to me and I have always felt they helped protray the blackness of the 40k universe without the need to be especially GrimDarktm.


'Our thoughts light the Darkness so that others may cross space.'

'Praise the Emperor whose sacrifice in live is ours in death.'

The article itself begins with a strident declaration that this is not a science fiction game. 'We call it a fantasy game set in the far future... a sort of science fantasy.' And that there was a strident attempt to link the game with the very well established Warhammer Fantasy Battle by calling it Rogue Trader's 'sister game'. Something that is clearly the case as 'Warhammer 40,000 uses many of the familiar mechanisms of WFB and even some of the same creatures, which are now revealed in their entire cosmic guise.' Another early confession was the fact that this was intended to be a skirmish game in which just 'a dozen' miniatures will do for a session, though, of course, there is a remark that you'd 'want to collect the lot'. Its clear to see that Bryan Ansell and co didn't quite realise the hit that they had on their hands and that over the next three years they'd expand the game considerably.

We also have the first piece of 40k fiction. A short tale about one Brother Tork of the Space Wolves Chapter. It does well to communicate the small scale nature of the game and its themes of interstellar horror and corruption. Of interest here is mention of the homeworld of the Space Wolves being Lucan. I wonder why it was changed? 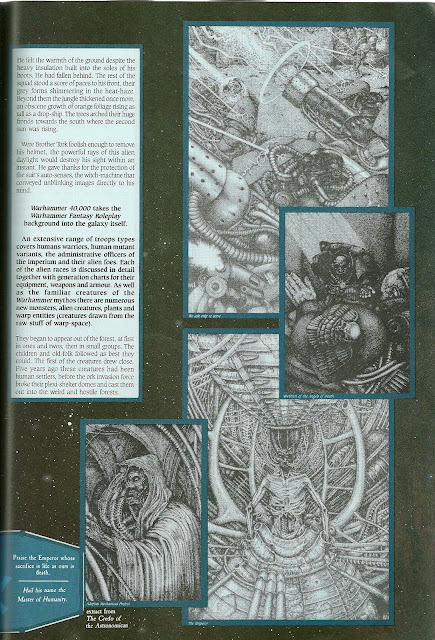 'Warhammer 40,000 takes the Warhammer Fantasy Roleplay background into the Galaxy itself.' Mythos is a word used frequently in the launch article, as if GW were attempting to build a world comparable to Lovercraft, Howard or Tolkien. The three writers are obviously big influences (though not as great as Moorcock) on the development of the background. These days, GW work hard to tell us that their games do not share the same worlds even though certain deities and characters appear in both WFB and 40k. The aim of the background was explained at the time as 'to create an almost medieval attitude amongst the human societies. Fear, superstition, self-sacrifice and common acceptance of death are all strongly featured. Technology is present, but it is not central to the way people think. Most common folk see technology as witchcraft- so do the technicians!' This is still a core element to the background. 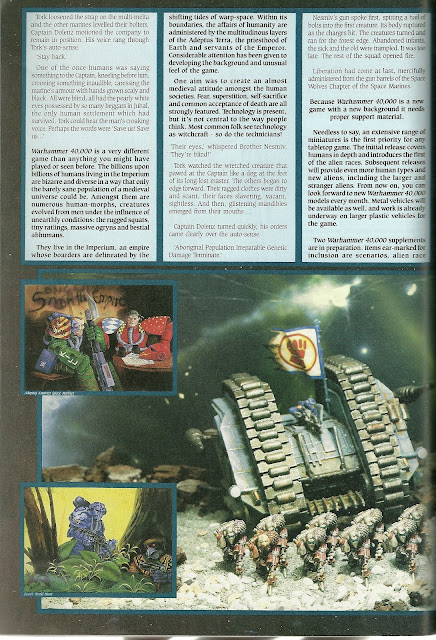 The first ever Space Marine model is used here to give gamers a glimpse of the future. The prototype for the plastic Land Rhino! 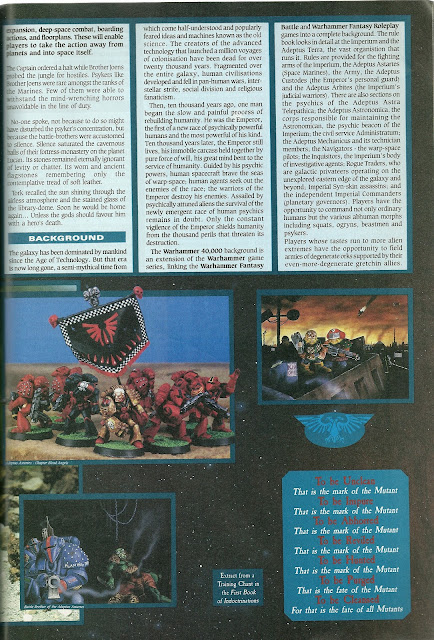 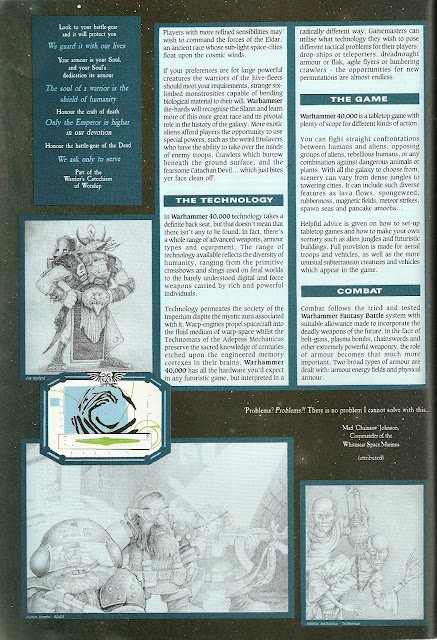 Those of you who remember my Viz post a few weeks ago (here's the link) may well be familiar with the modern GW view that WFB and 40k are two deadly serious worlds and never should the twain meet! Rogue Trader encouraged the opposite! 'In Warhammer 40,000 technology takes a definite backseat, but that doesn't mean that there isn't any to be found. In fact, there's a whole range of advanced weapons, armour types and equipment. The range of technology available reflects the diversity of humanity, ranging from the primitive crossbows and slings used on feral worlds to the barely understood digital and force weapons carried by rich and powerful individuals.' I really like this about RT. If you are familiar with Warhammer Siege, you'll probably know the picture of a skirmish fought within the walls of the Mighty Fortress. Its a rogue navigator who's enlisted some primitives to aid him. These types of game (a mix of WFB and RT) really, really fascinate me and will certainly be high on my agenda once I have enough RT to get gaming with. 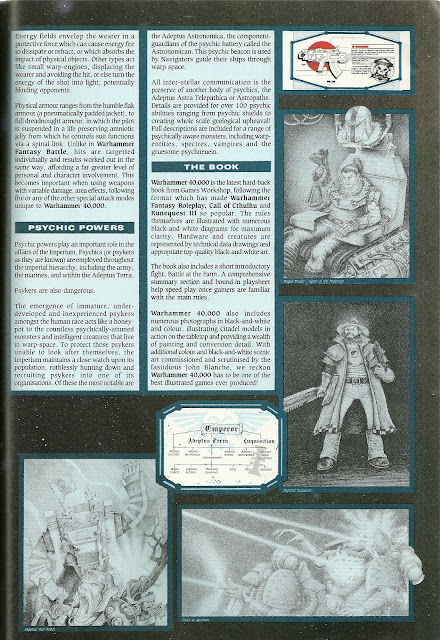 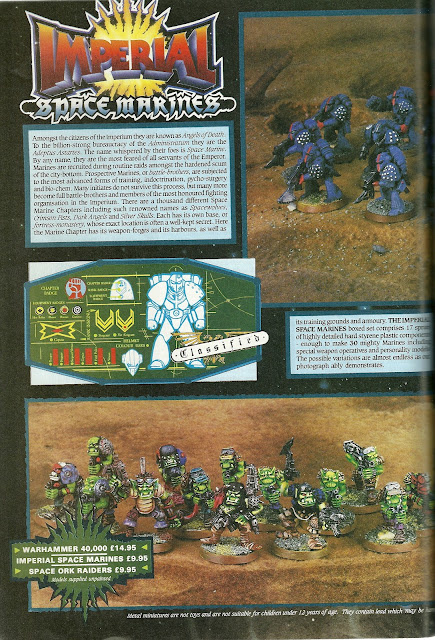 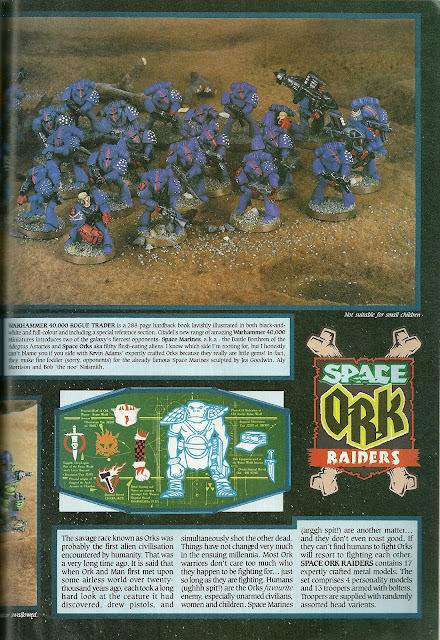 Ahhh, the first two box sets. Someday I'll get hold of these. The plastic space marines box set is one of the Holy Grails of collecting, though they do turn up with greater frequency that the Citadel Giant! The marines were a really ground breaking kit at the time and you really could go wild with the models and produce totally wacky miniatures. An iconic release really. The Ork Space Raiders were metal (why no plastic ork set?) and had a lovely whiff of the 'Black Widows' Biker Gang from the Clint Eastwood classic 'Every Which Way But Loose', mixed with 80s street punk. I have quite a few of these already thanks to the Troll Trader on eBay. 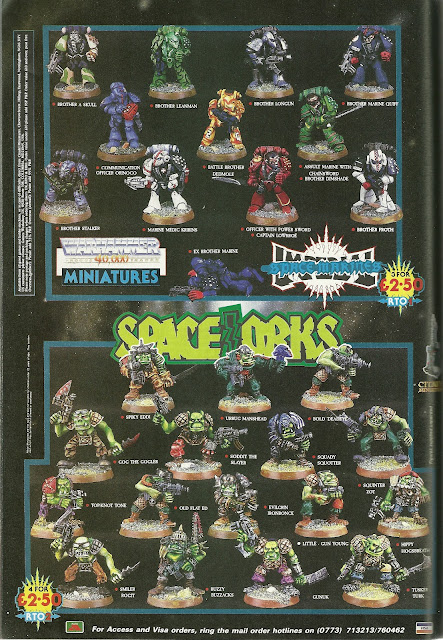 Here are the additional metals released alongside. It will be these babies that I will be concentrating on collecting when it comes to RT. I am already a frequent offender of late night eBay trawling for Warhammer stuff and I am sure the wife will be happier if I limit things for now. At this time, Citadel were still naming many of their metal releases and there are plenty of amusing names here; Brother Quiff? Brother Longun, Top-Knot Tone, Spiky Eddi and the brilliant Hippy Hogsbreath.
Posted by Orlygg at 03:50